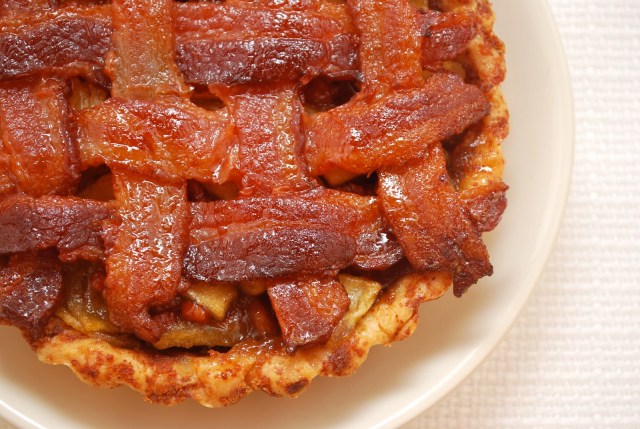 I’m not entirely sure either of my grandmothers even made apple pie. My mom tells me that she remembers her mother making the occasional apple pie for my grandfather, and if it was for him, that explains why I never saw any. He was known for hiding his pies from people. Not even his adorable granddaughter (that would be me!) could finagle a piece out of him.
So, although I don’t know what my grandma’s pie actually tasted like, here is how I imagine it:

It would be the quintessential apple pie made with the utmost grandmotherly love. We would have made it together when I was staying for a sleepover, after playing countless games of Cootie and Old Maid, eating cheese puffs, and going to the book store for a special treat in her red hatchback Pinto. She would be wearing her pink, purple and white skirt that I loved so much and wished I could wear. She would never get exasperated or impatient with me when I did something wrong, and would always let me lick the spoon. We might have some fun trying on her wigs or smelling her vast collection of Avon perfumes while waiting for the pie to bake. I would be pleased knowing that later that night I got to sleep in her bed (with Granddad relegated to the couch…maybe he should have shared his pie!), where I would always, and I mean always, wake up with my feet where my head should be. And when the timer went off, and she took the pie out of the oven, the smell would forever remind me of her. (That and the smell of Avon perfume that was slightly past its prime.) The pie would be mounded high with cinnamon-sugar apples, and topped with a gorgeous lattice pastry crust. It would be my inspiration for apple pie when I got older. Until…
I decided that apple pie is WAY better with bacon! 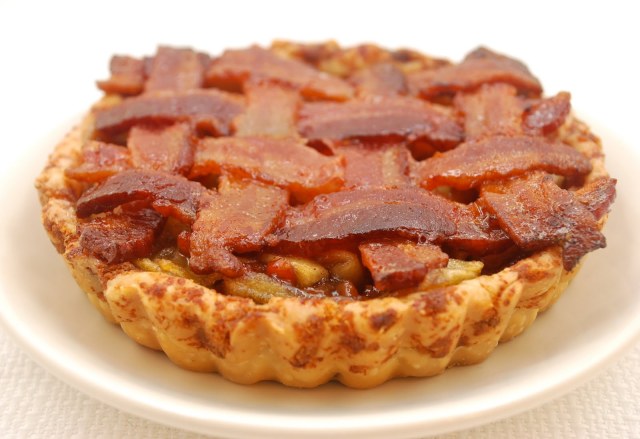 With no offense to my grandma’s imaginary apple pie, I present to you my Bacon Makes Everything Better Apple Pie, created as my entry for a chance to win the Baconalia challenge, a recipe contest by Foodbuzz and Denny’s.

Recipe and more after the jump…

Bacon Makes Everything Better Apple Pie
Makes 2 mini pies
8 slices bacon (applewood smoked, center cut, thick sliced), divided use
1 sheet refrigerated pie crust
2-3 small granny smith apples (2 cups yield)
1 tablespoon sugar
4 tablespoons maple syrup, divided use
1/4 teaspoon cinnamon
2 teaspoons flour (plus more for rolling dough)
To make the lattice tops, preheat oven to 400 degrees. Cut 4 pieces of bacon in half crosswise, then again lengthwise (to create long strips). Each lattice will use 8 strips – 4 horizontal and 4 vertical. Weave them together to create a basket-weave pattern. Place lattices on a rimmed baking sheet lined with foil, top with another piece of foil, and finally another baking sheet to weigh down the bacon. Bake for about 17 minutes, until bacon is brown and slightly crisp. Drain on paper towels and reserve. 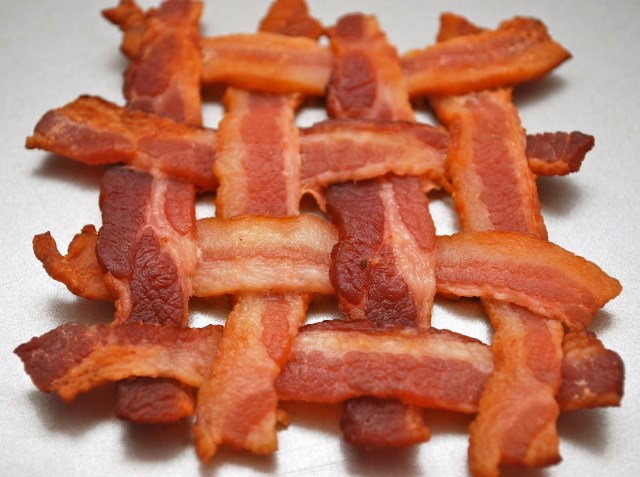 With remaining 4 slices of bacon, chop in a small dice and fry in a large pan. Cook until bacon is very crispy, then drain on paper towels and let cool. Reserve 2 tablespoons of bacon grease in pan.
Once the bacon bits are cool, place 2 tablespoons in a grinder (I use a coffee grinder designated for spices) and run until the bacon is ground to a fine dust. Reserve remaining bacon.
For the pie shells, turn oven down to 350 degrees. Sprinkle flour on counter and roll out pie dough slightly to about 12 inches across. Cut out circles larger than the tart pans. Sprinkle bacon dust over each crust and press in lightly with rolling pin. Fit dough into tart pans, tucking excess dough underneath to create a thicker edge. Press buttered foil into shells and fill with beans or weights. Blind bake shells for 20 minutes. Reserve. 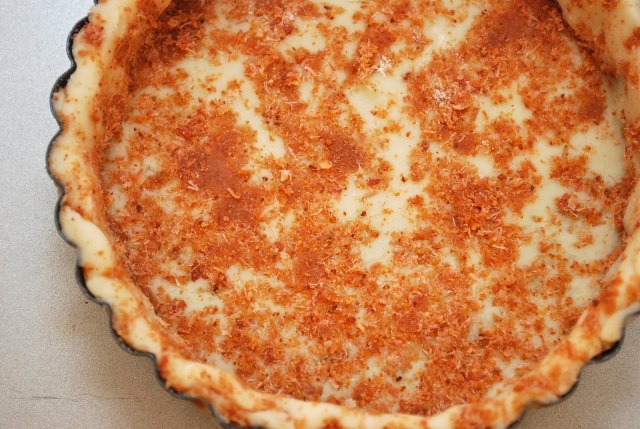 When ready to fill pies, peel and quarter the apples. Cut each quarter very thinly (about 8 slices each), then cut in half crosswise. In the same pan you cooked the bacon, heat the 2 tablespoons of bacon grease. Add apples and remaining bacon bits. Sauté until softening, then add sugar, syrup and cinnamon. Cook for another minute until mixture becomes like caramel. Remove from heat and stir in flour.
Brush the pie shells with 1/2 tablespoon of syrup each, coating sides and bottom. Fill the shells with the apple mixture. Bake at 350 degrees for 12 minutes. While the pies are baking, coat both sides of each bacon lattice with remaining maple syrup. After 12 minutes, place a lattice over each pie and return to oven. Bake for about 13 more minutes, until bacon is slightly crisp.
Cool slightly before cutting. 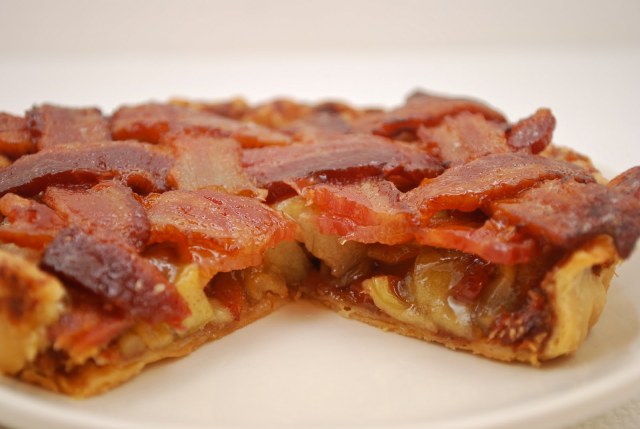 Cue the angels singing and the light shining down from the heavens; I am officially in love. I’ve long considered myself a bacon lover, but this? Words escape me…this dessert left me speechless, stunned, in awe. Sweetness and saltiness mingle, then reveal hints of maple and cinnamon with bacon running through every bit of every bite. Bacon baked into the crust, bacon mixed into the filling, apples sautéed in bacon grease, maple-candied bacon on top {gasping for breath}…my head is spinning with all this bacon-y goodness. Think I’m exaggerating? Go ahead…make this for yourself and see. Soon you too will be singing the praises of this decidedly un-grandmotherly apple pie.
Vegetarian friends be warned…I’m thinking of implementing a new rule in the house: going forward, all desserts must contain bacon in some form. Sounds reasonable, right? 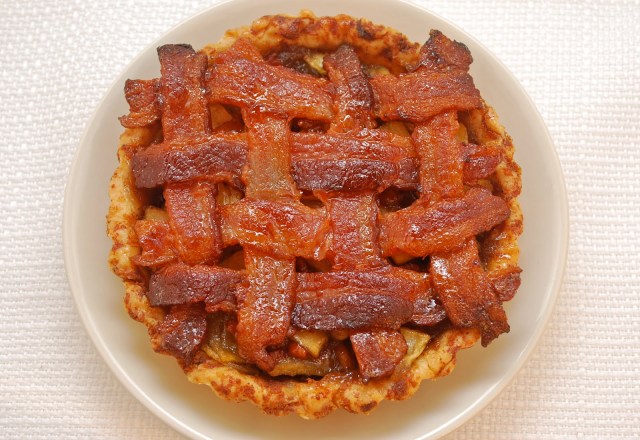 Here is my recipe for a Maple Bourbon Apple Pie with a Bacon Pecan Crust. Bacon and apple? Not uncommon. Pecan and apples? Not uncommon. All together and topped with maple and spiked with Bourbon? Uncommon, and delicious! I’m so tempted to throw cheddar cheese into the crust so it’s even crispier, but I’ll start you off slow with my unconventional non-Stepford wife recipes!
My recipe for this was inspired by a Maple Bourbon Ice Cream Sandwich I ended up eating with bacon at an epic foodie BBQ this summer – see here. This is the pie version of it, made 2.0. It is a sweet, savoury and nutty dessert that’s perfect for summer BBQ’s… or breakfast. Bacon for breakfast and you get your serving of fruit too! I’m so efficient! I’d call it a great start to the day, and a “healthy balance”… okay well maybe it’s not doctor approved, but it’s Follow Me Foodie approved.
Note: The measurements are a bit rough, and you may have to taste along the way and adjust accordingly to your own preferences.